The AYRIAL seal for “best psychics and best spiritual mediums who are tested and recommended!”

The art of intuitively accessing information in ways that expand the boundaries of ordinary reality has been labeled the world’s “second oldest profession.” People exercising this ability have been variously called oracles, shamen, seers, clairvoyants, mediums, psychics or simply intuitive consultants.  Some cultures have bestowed upon them positions of power and authority.  In the days of Imperial Rome, the Senate once required that no law could be passed until the official oracles had been consulted.  However, being an “oracle” in another state might have you burned at the stake for practicing witchcraft.

Today, millions of individuals, professionals and business owners pay hundreds of dollars to consult with psychics.  The AYRIAL group is about raising the bar on psychic professionals – we invite only the best in the field based on years of experience, knowledge of the psychic arts, reviews, testimonials and then; we do our own testing on them.

When you see the AYRIAL seal next to one of our intuitive, psychic, psychic medium, spiritual medium member; it represents that the member has been “tested and recommended” by an AYRIAL associate. We believe “testing” one’s psychic abilities is as important as the “tester.”  An AYRIAL associate who tests a psychic for a “cold reading” has excellent knowledge of the psychic arts and is experienced with, and understanding various aspects of the psychic reading.

During the psychic’s “cold reading” session, our AYRIAL associate will be looking for hits, specifics, details, timeframes and how whether or not the reading resonated as well as accuracy.  Specifics are extremely important rather than vague statements.  For example, a psychic who states, “I see you visiting Florida during your lifetime,” would be vague.  The odds of this is likely to be 100% that the person would travel to Florida at least once during their life. You don’t have to be psychic to make general, vague predictions.

In addition to a “cold reading,” we also ask if the psychic would be willing to do *Zener Card testing. Perceptual psychologist Karl Zener (1903-1964) designed the cards in the early 1930s for experiments conducted with his colleague, parapsychologist J. B. Rhine (1895–1980).

Various factors can affect the psychic reading including; fatigue, if the participant has used drugs can alter what a psychic picks up on, including an unwilling participant that often creates a barrier and makes it difficult for a psychic to pick up anything.

Every psychic has their own area of strengths and weaknesses.  While a psychic can be very accurate for one person, doesn’t mean they will be as accurate with the next person. 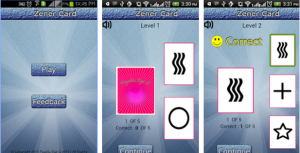 * If you like to keep your psychic abilities challenged or simply want to exercise your intuitive and psychic abilities, check out Test Your ESP with Zener Cards APP developed by Victoria lynn Weston. Available on Google Play and iTunes.