Brad and Angelina What Went Wrong

Brad and Angelina What Went Wrong

Any person that has gone through a mid or long term relationship could say that relationships are not easy; all relationships go through ups and downs but why some make it and some don’t?

First it is the quality and quantity of the connections between the two people. Those connections are based on similarity and combination of energy components at the time of birth.

Second it is free will: if both people want to stay together they will, it is a matter of time and commitment to rebuild what went wrong. Nevertheless, if all the connections are broken they might not want to give it a try.

In the case of Brad and Angelina, without going into a deep analysis, one can easily see three connections between them in their birth charts, they have three similar energy components. Generally speaking one single connection could do the trick to bring two people together; the problem is that when on any given year the energy of that connection is clashed, the connection brakes, and since there aren’t any other connections around, the couple ends up living separate lives.

Since a picture paints a thousand words, take a look at Brad and Angelina’s birth charts and notice the circled components, which are the ones that they have in common: their connections. 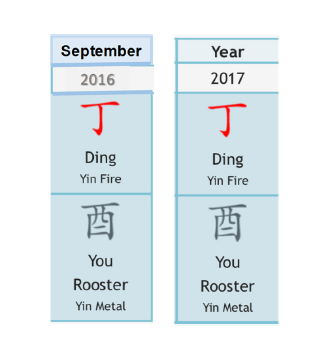 In a previous publication I mentioned that the energy of 2017 had already started to arrive. That is because the energy components during the month of September 2016 are the same found during the year of the Rooster 2017, so the strength of the year’s energy started to be felt.

Based on the five Chinese elements theory, metal destroys wood and water destroys fire. Being said that, the energy of September, when the energy of 2017 started to arrive, created a clash in two connections between Brad and Angelina.

As a result, they ended up with just one connection not strong enough to hold them together.

Of course the problems didn’t start on September 2016. One can easily see that there were issues since 2015. For your information the day pillar in any chart represents the self and his/her significant other. When the energy components of any given year are the same as the energy components of the day pillar that implies problems at home, even separation or divorce and Brad went through that situation during 2015. 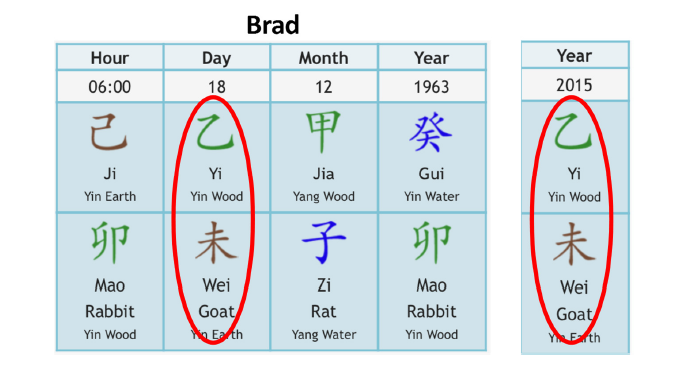 And as soon as 2016 arrived, Angelina started to suffer because the metal energy of the year of the Monkey created a combination/destruction relationship with the fire energy of the Snake in her chart. In her case it is primarily a destruction relationship and affects many aspects of her life because she has Snakes in three out of her four pillars, including her day pillar that relates with her spouse.

To be on the safe side and increase the chances for a longer and better relationship it is important to have various connections with our partner or significant other so even if one or more break due to a clash, the other ones are there to support the bond until the clash goes away. Contact me if you want to know how safe are your connections or how to re-establish the connections: VivianaEstrada.com

Viviana Estrada is a certified Chinese astrology reader, Feng shui consultant and Spring Forest Qigong leader with an unceasing desire to help people, which has kept her busy for years unveiling the secrets and applications of Chinese metaphysics.

Viviana’s consultations are meant to guide those people that require advice in a decision making process, or in regards to an important life event, or have specific issues or concerns, or simply want to become aware of the opportunities or threats that are coming their way.  She consults with individuals by phone, email or SKYPE.

Launched in 2015, AYRIAL is a technology-driven “body, mind & spirit” lifestyle platform with its office based in Atlanta, GA.  AYRIAL allows users who seek exceptional psychic, intuitive consulting, astrologers, life coaches, feng shui consultants to easily connect with them and to keep them engaged with exclusive content. www.AYRIAL.com