Chinese Astrologer, Viviana Estrada: How to Determine if Your Money comes from Windfalls or from Hard work!

Viviana Estrada is a Chinese astrology reader, certified Feng shui consultant and Spring Forest Qigong leader with a desire to unveil the secrets and applications of Chinese metaphysics.  Follow AYRIAL

If you practice a religion, don’t panic, these ten gods have nothing to do with your God. There is nothing religious or spiritual about them, they are not even deities, they are stars or bodies of energy resulting from the interaction between the five Chinese elements wood, fire, earth, metal and water.

The five Chinese elements interact with each other under three different cycles:  productive, controlling and weakening. To define the ten gods we are going to focus on the productive and controlling cycles:

Wood controls earth (for instance, a plant that is wood, eats up all the nutrients in soil that is earth).

Earth controls water (for instance, soil that is earth, absorbs water and makes it disappear).

Metal controls wood (for instance, a saw that is metal, chops wood).

Connect with a vetted Feng Shui Consultant on AYRIAL  Looking for a business intuitive?

On the other hand, as explained in a previous article titled  A Picture Paints a Thousand Words, in your BaZi chart you are identified as the top element in the day of birth, which is called the day master.

Applying the five element cycles in reference to your day master we obtain the following:

In summary, the ten gods’ English translation and their abbreviations are as follows:

There is not a single object, person, relationship, or situation in life that cannot be represented or defined by a ten god and everything is written in your birth chart. For instance, let’s see if you are more inclined to make money from windfalls or from hard work: 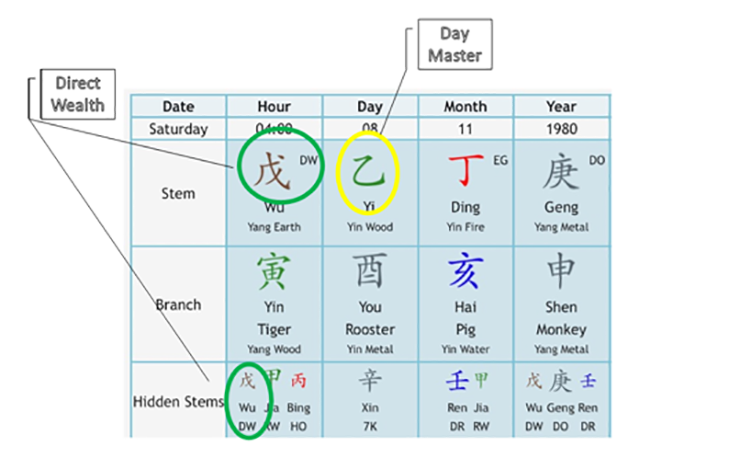 If you don’t have in your birth chart any IW or DW stars you don’t have wealth stars in your chart but don’t panic, there are other ways to make money. Contact me to learn more.

Viviana’s consultations are meant to guide those people that require advice in a decision making process, or in regards to an important life event, or have specific issues  or simply want to become aware of the opportunities or threats that are coming their way.   Follow  AYRIAL