Available for speaking and group engagements. 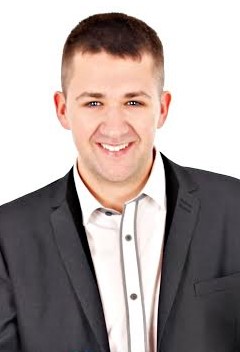 Scotland’s “Rising Star Psychic Medium” Luke Danskin is the next big sensation that is captivating the spiritual world. Growing up, Luke never told anyone about his ability to see and communicate with the spirit world. After dealing with loss of his own close loved ones and with the encouragement of his cousin, he opened up about the ability he has and continued to develop his gift.

After several private readings and honing his psychic medium-ship skills, the demand for Luke grew beyond belief and has led him to garner an extensive waiting list around the world.

Although Luke’s live shows are full of emotion, his natural warmth and endearing personality makes audiences feel completely at ease.

Passionate in encouraging people to celebrate the lives of loved ones, laughter is a common theme at Luke’s shows.

Since taking to the stage, Luke has “sold out” every single live show he has ever performed. Audiences are left utterly speechless at his capability to give detailed messages with amazing accuracy. Luke’s waiting list for private readings is over 4 ½ years long.  Luke Danskin will be coming to the United States for his first American tour.

I have been working with the top spiritual mediums in the world for the past 20 years and I am very discerning when it comes to a good medium. When I had a reading with Luke, he knew absolutely nothing about me and his accuracy astounded me. Luke Danskin is definitely one of the top spiritual mediums in the world! I look forward to having him at our Celebrate Your Life events.”

I have literally had hundreds of readings in my years working for James Van Praagh testing potential candidates for mentorship. I can 100% sincerely say, that Luke Danskin was one of the most accurate and precise readings I have ever had in my life. He is beyond gifted and I give him the highest of recommendations…truly the best!

“This was my first every reading, to be honest didn’t really believe in it all. This guy told me stuff about my past, present and future. The past and present was spot on, I just need to wait and see about the future. I will defo get another reading”