Insights into the Life & Passion of a Renowned Chocolatier and One of America’s Top Pastry Chefs, Kriss Harvey

AYRIAL TalkTime –  Host Victoria lynn Weston puts a spotlight on the life and passion of one of America’s Top Ten Pastry Chefs and Renowned Chocolatier, Chef Kriss Harvey in this podcast episode, The Art & Seduction of Chocolate.

Chef Kriss Harvey has worked at the finest luxury hotels  including, The Ritz Carlton in Washington, D.C., NoMi in the Park Hyatt Chicago and at Bartolotta Ristorante Di Mare at the Wynn Resort in Las Vegas. He was also Executive Pastry Chef at the The Bazaar by José Andrés at the SLS Hotel in Beverly Hills before segueing to andSons Chocolatiers,  in Beverly Hills.

Are you curious to know where chocolatier Chef Kriss Harvey gets his inspiration to design of his Bonbons?  Oh, you’ll definitely be surprised to learn where he tattooed the Theobromine formula.

Listen to The Art & Seduction of Chocolate on the AYRIAL TalkTime podcast!  (56:42) 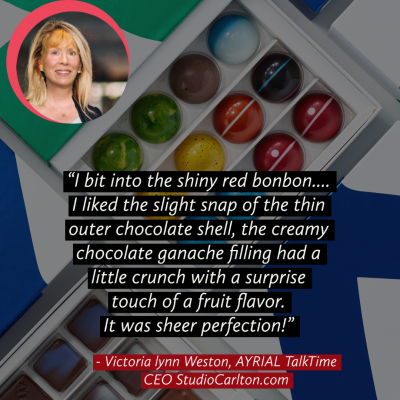 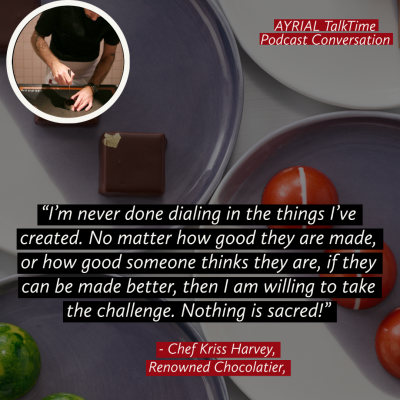 Renowned Chocolatier, Chef Kriss Harvey was named one of America’s Top 10 Pastry Chefs in 2017. He has been at the helm of pastry departments at several of the nation’s top luxury hotels, including The Ritz Carlton in Washington, D.C., NoMi in the Park Hyatt Chicago and at Bartolotta Ristorante Di Mare at the Wynn Resort in Las Vegas.  He was executive Pastry Chef at The Bazaar by José Andrés at the SLS Hotel in Beverly Hills before coming to andSons Chocolatiers.  Utilizing a state-of-the-art facility in downtown LA, Chef Kriss Harvey produces both a Classic and a Modern line of bonbons. Hand cut and molded, his products boast Valrhona as his exclusive base.

Chef Kriss Harvey trained under some of the world’s most highly regarded chefs. He began his career in the U.S. at the famed Cacao Barry Chocolate Academy near Philadelphia, spending time under the tutelage of Master Chocolatier Pascal Janvier. With a desire to fine-tune his knowledge in French pastry,Chef Kriss Harvey moved to Paris where he studied with legendary pastry chefs Christophe Felder at the Hôtel de Crillon and MOF Emmanuel Ryon of École Gastronomique Bellouet Conseil. He staged under Spanish pastry chef Oriol Balaguer. He also studied with MOF chocolatier and candy maker Pierre Mirgalet.

As a testament to his devotion to chocolate, Chef Kriss Harvey has the chemical formula for theobromine tattooed on his right arm.

Today, Chef Kriss Harvey is dedicated to leading a team of talented chocolatiers at and-Sons.com.

Victoria is also the President and Founder of AYRIAL.com, a body, mind and spirit association featuring vetted lifestyle consultants and StudioCarlton.com, producers and developers of custom Amazon Alexa Skills/apps.

Studio Carlton is a group of visionaries, experienced voice designers and Amazon Alexa Skill developers. The Studio Carlton Team is passionate about creating compelling, conversational Amazon Alexa Skills that include engaging visual presentations & streaming video/audio for companies and professionals to engage and expand their audience on the innovative Amazon Alexa voice platform.